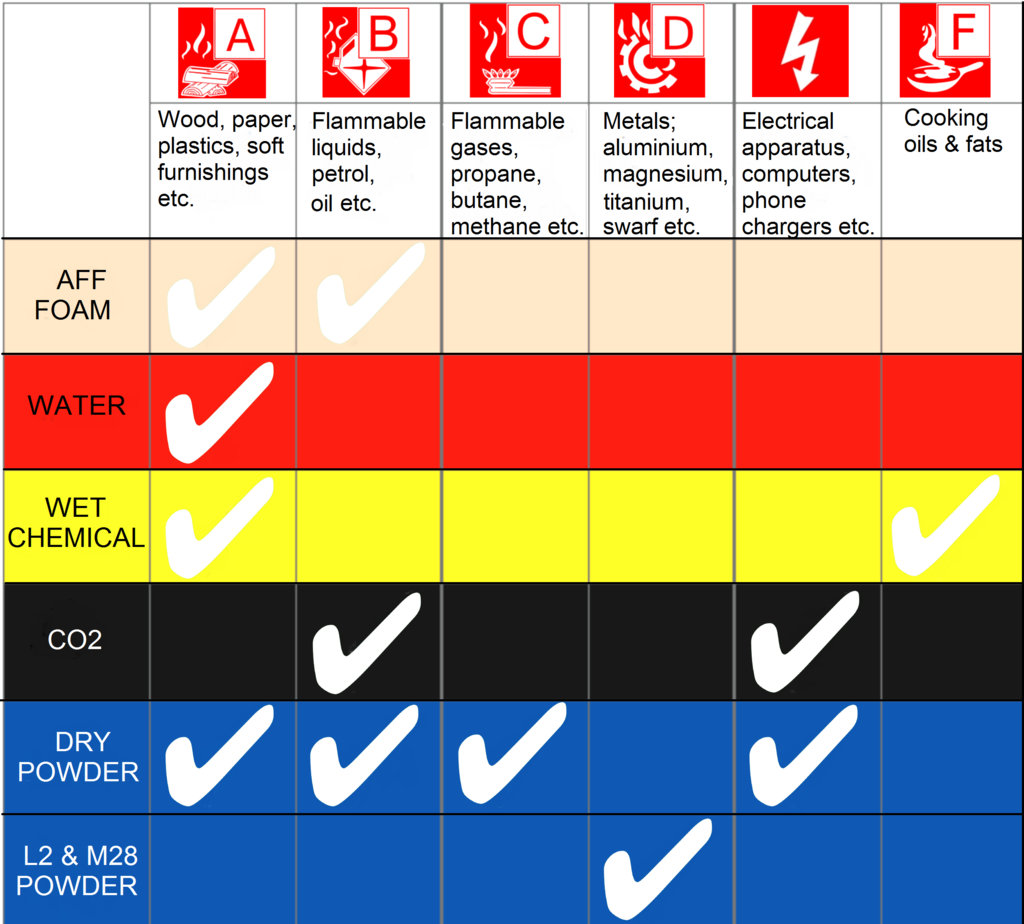 Water extinguishers are one of the most cost-effective ways to fight Class A fires, those fuelled by solid materials such as paper, wood and textiles.

There are four different types of water extinguishers: water jet, water spray, water with additives and water mist or fog.

All water extinguishers have a red label.

Foam extinguishers have a cream label.

Powder extinguishers are a good multi-purpose fire extinguisher because they can be used on Class A, B and C fires. They can also be used on fires involving electrical equipment however, they do not cool the fire so it can re-ignite. Powder extinguishers can also create a loss of visibility and may create breathing problems. They are not generally recommended for use inside buildings unless there is absolutely no alternative.

Powder extinguishers have a blue label.

CO2 extinguishers are ideal for places with a lot of electrical equipment such as offices or server rooms because they are safe to use on fires involving electrical apparatus. Carbon dioxide extinguishers do not leave any residue, unlike a foam extinguisher. They can also be used on Class B fires, those involving flammable liquids such paraffin or petrol. CO2 extinguishers work by smothering the fire and cutting off the supply of air.

Wet chemical extinguishers are suitable for use on Class F fires involving cooking oils and fats, such as lard, olive oil, sunflower oil, maize oil and butter. They are extremely effective, when used correctly. The wet chemical rapidly knocks the flames out, cools the burning oil and chemically reacts to form a soap-like solution, sealing the surface and preventing re-ignition. Although they are primarily designed for use on Class F fires, cooking oils and deep fat fryers. They can also be used on Class A fires (wood, paper and fabrics) and Class B fires (flammable liquids).

Fire blankets are primarily for use on hot oil fires such as frying pans or small deep fat fryers. They can also be used on someone whose clothing has caught fire. They work by smothering the fire, stopping access to the oxygen fuelling it and extinguishing it.

We supply evacuation equipment, including logbooks and first aid kits, and evacuation aids to help you make sure you can safely evacuate your premises in the event of an emergency.

We stock a range of fire alarm systems, smoke and heat alarms for the detection and warning of fire.

We offer a range of professional online, classroom-based and practical fire safety training courses and DVDs.